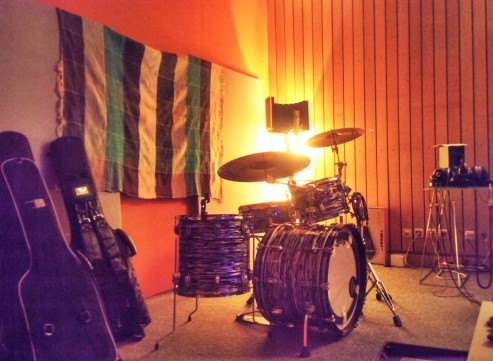 So here’s to your survival and swimming up the stream, crossing over one dam after another, until we get to Rock and Roll Heaven’s gate.– Indigo Girls

I went to my first rock concert when I was 16. I spent a lot of my late teens and early 20’s in rock venues, practice spaces, and recording studios. Sometimes the music was good, sometimes the music was bad, but it was always freeing, and often holy. I know there are people out there who disagree with me, but when I hear that perfect guitar rift, I’m pretty sure I’m hearing the voice of God just as clearly as when I hear a perfect rendition of Ave Maria. So here’s a prayer for rock ‘n’ roll, for those who make it happen, regardless of their beliefs, and for the ways it brings people together, makes people free, and gives us all something to sing about.

To the Universe that gave us Jimi Hendrix, Neil Peart, and Debbie Harry,

Forgive us for those who railed against music in God’s name.
Hatred has never been holy, and creation almost always is.

I pray today, for a world with louder music and quieter bigots;
a world with more guitars and fewer guns;
with more cowbell and less hate.

Did you hear that world? I’ll say it again,
more cowbell, less hate.

Dear God let that be our refrain.

God, give us a world with more songs that let us glimpse heaven even while they scream about highways to hell.

Because “Jesus died for somebody’s sins but not mine” better represents my faith than “I will build a great, great wall”.

Because there is justice in a drum fill,
and hope in a guitar wail.

So, God bless the punks, the grunge rockers, the metal-heads, and the classic rock junkies.
Bless the musicians who play too loud and the fans who dance too hard.
Which is to say,
God bless rock ‘n’ roll and God bless me.

“Mi pecado es grande,” Cynthia joked, dragging a six foot root behind her to throw into the fire. “My sin is big.”

I was in Iquitos, Peru. A church recently bought a small plot of jungle ground outside of the city to build a missionary school. We had begun by sleeping in tents on shaky platforms made of sticks, but now it was time to clear the land for small houses and a maloca, a circular hut for meetings.

The property was called the virgin jungle. We were, in effect, destroying a small piece of it. Some of the Peruvians came from the city; many others came from deep within the jungle and had done this many times before.

The men used slashing and burning to clear a stretch of a hillside, down to a small creek that flowed with clear, fresh water. The last mission school had still water, and students had come down with malaria. Cynthia, the young woman who had pulled out the root, was a survivor.

As the men slashed and burned, the women came behind. Mama Noemi, the mother of us all, crouched like a baboon over the burnt earth with her machete. She had loose breasts, strong hands, and wrinkles deep around her eyes. She had come to the mission school with her husband after she said she had been healed of blindness. She spoke more jungle dialects than any linguist at Harvard ever could.

The rest of us girls, eight of us or so, came behind mama. We crouched as she did and used our hands to pull out the root systems that had fed the trees for hundreds of years. We would pull and tug and hack away, sometimes two or three girls working at one root system weaving across the top of this small mountain. That’s when the joking began. We must be pulling out our sins, hacking away in this jungle heat and sweat.

As we pulled the ground, the soil and ashes began to give way to the whitest, purest sand I had ever seen. The afternoon light was beginning to fade into stretches of purple and yellow. The women went down to the creek to bathe, allowing cool water to soothe tired muscles. Mama Noemi crouched again, this time beating her laundry against a rock and then slapping it rhythmically into the water. The cooking fire lit up the dusk and smoke curled into the sky.

That night, after dinner and in the dark, we gathered in a circle and sang. A girl used a tambourine from the city, and a boy beat out a rhythm echoing Mama Noemi’s laundry on his cajon, a handmade jungle drum. The stars above wrapped their gauzy light around the southern cross constellation and twisted their way through the dark, twinkling with the same echoing rhythm and bringing their own music to the cacophony. This wild place, this tiny patch of untamed ground was becoming a home, and each song was a root of their own spirituality sinking into the ground and declaring the land theirs. So they sang, wailing to the sky, their spirits as wild as the jungle surrounding them.

I love the Ramones. Their music has always spoken to me, so it is no accident that the title of this post is also a title of one of their songs. I have been honored this past month to see the amazing post about the strength of people around the world to bear burdens, to survive hardships, and to live with grace and laughter. Yet I cannot help but notice, that most of these posts deal, in one way or another, with the burden of womanhood.

Since I was a very small girl I have been aware that there are burdens many women know that many men will never face. I have been aware that it requires a special strength in order to endure the label  “girl” and the labels that come with it like “whore”, “sweetheart”, “bitch”. The recent tragic events in Santa Barbara, California, have only made me more aware of what can, and does, happen when patriarchal ideas are taken to a violent extreme.  (For an intelligent summary of this check out Laci Green’s video on Elliot Rodger and the media reaction to this tragedy. It is worth watching but may be quite disturbing for anyone who has a brain and a heart). In light of this, and other tragedies, both personal and global,  it seems that we all must be more aware than ever of the strength it takes live in this world.

But here is what this month has taught me: we women, we who have endured  more than our share for so long, we have the strength to endure. Moreover, I have seen proof that despite tragedy and suffering, the strength of the human spirit, across all genders, sexual orientations, races and religions,  will always endure.  We all have the strength to continue to walk along the  never-ending road toward justice and equality.

Which brings us to this month’s theme of Equality. This month is not just about gender equality, it isn’t just about LGBTQ equality either. This month is about how if we all have the strength we can create of would that treats people with an equal love, equal respect and allows everyone equal rights. So show the world your strength, your commitment to equality and submit now! I, for one, can’t wait to see the hope and strength of spirit this month brings. And let’s all remember the wise words of the Ramones:

-The Ramones, Strength to Endure

If the only prayer you said was thank you, that would be enough.

For our part, we here at Searching Sophia’s Pockets are, as always, grateful for all of you, and your creativity. We say a prayer of thanks for art and music, writing and dancing.

So once a week, we invite you to share something you are thankful for with the community of Searching Sophia’s Pockets.

What prayer of thanks do you want to share this week?

Today’s post comes from Duncan Kinzie, who an emerging actor, writer and musician in the St. Louis area.  Duncan offers us some wisdom on his love of creative expression, and how that leads him to experience his own spirituality  and how that differs from his experience with religion.

Today, I wrote a song. I just had a musical urge to sit down and start on a song about how I was feeling, and while it may not have a single word pertaining to my religion in it, it is certainly a testament to my spirituality.

See, I’m not a particularly religious person. I prefer instead to think of my spirituality more along the lines of philosophy. I like to get what I can out of what’s around me, and devise meaning from what I’ve experienced and what I know to be true, rather than being told what is real and true by others. Often times, the what I have been told and my experiences seem to  have common themes, but  I discover more and truly understand more by sticking to what I experience for myself.

I’m a creative type, to be sure. I’m strongest in the fine arts and things I can succeed in through several different paths or methods.  I often have times I just need to sit down and express emotion through art. I can vent my emotions through several different forums: music, writing, acting, and occasionally sketching. Whenever I do fall to one of these creative moods, I usually start by expressing raw emotion, and wind up drifting into one of those more philosophical zones. If it’s a stressful situation I’m describing, that deep thought can often times help me figure out what to do, or at least make me feel better.
So personally, creativity is my religion, or at least creativity is how I get in touch with my spirituality. For me, spirituality is about getting in touch with life and really milking it. It’s about finding that good stuff and that not so good stuff, and taking advantage of both in order to be a part of the human experience. What comes after this life is, and always will be, a mystery, so I’m going to focus on what I can derive for myself in this life. I do that through creativity in art and my little philosophy deal.
I think the reason I stick to that, and not religion, is because when I’m writing a song or a script, or when I’m jumping around a stage spouting Shakespeare, there aren’t rules. I can express myself freely, and no matter what conclusion I come to, it’s correct. I got there by some process or another, so in some sense, it’s always right. I’m not sure religion can always say the same.