I met a woman today. I smiled at her and she half smiled back. I motioned to my camera, asking permission to snap a photo. She nodded her head graciously and gave another half smile as I clicked away.

She was crouched on the ground, listening to the other temple women chatting nearby as they all kneaded the wool in their hands around simple wooden spindles, wrapping yards of yarn around their elbows and arms as the strands became longer. They were all in the sun, soaking up the heat from the ancient stones beneath them.

It was March, but the nights were still bitter and the sunshine was a treat in this valley of the Himalayas. Men, women and children were all around them, taking off their shoes, entering the temple, ringing the bell above the door to awaken the gods and taking pictures of their families on this particular holy day. The women continued their work, mostly oblivious to the movement around them. One women lay down on the stone to take a cat nap in the warm sunshine.

I entered the temple, came out again, snapped the picture of the woman sitting alone, continued walking around. A sign told the story of Manu and the flood, and how the caste system had been created. For some reason I came back to her. There was something about her wrinkles and her half smile and her loneliness setting her apart from the other old women. I wanted to give her something, anything. I began to dig through my purse. Money? No. She’s not a beggar. Chapstick? That’s just silly. I finally found a pair of pink woolen mittens at the bottom of my bag. Perfect. I walked up to the woman for a second time, this time coming close and bringing my hands together in the traditional Indian namaste greeting. We couldn’t speak each other’s language, but it was enough.

I bowed to her, smiled, and handed her the mittens. She chuckled a bit from surprise, but took them and gave me a deep nod, with a real smile this time. As I walked away, the other women had stepped closer, murmuring about the gift and the unexpected bit of good fortune. She was gently tugging the mittens on and wiggling her thumbs in their warmth. I bowed to her again before leaving and she smiled, waving a pink hand at me before I disappeared around the corner. 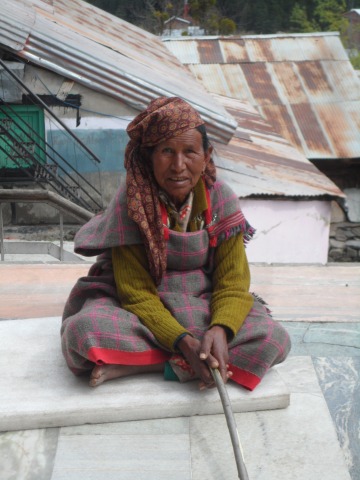