It was my first Christmas away from my family. I was used to White Christmases, or at least cold ones, coating the windows with frost on the south side of Chicago. Now, I was in the depths of the jungle in a tiny city of Peru.

I was visiting my friend, Deysi, for our usual lunch together.

“What are you doing for Christmas?” I asked. Her eyes lit up.

“I’m throwing a Chocolatada,” she said. She went into the other room and came back with an enormous box full of toy airplanes, barbies, and plastic whistles. “I’ve been saving up for it all year.”

She went on to explain that those who had the means would throw a Chocolatada in their neighborhood- a party with toys, bread rolls, and yes, hot chocolate galore. It was made for children who might otherwise not have a Christmas.

When the day came, Deysi was at her best. The pot of hot chocolate was big enough for a bathtub, and had bits of cinnimon sticks poking out of the thick, hot liquid. She placed a sparkly pink sign outside her door reading “Jesus te Ama”, Jesus Loves You, and a Santa Clause pinata. The toys she had shown me were already wrapped and ready, sitting in large piles all over the kitchen table.

The Chocolatada was set for 3pm. Kids began to arrive at noon.

“Tia Deysi, is it ready? Is it ready?” They would ask, smashing their faces through the grate on the door. “Not yet, not yet, have some patience!” She would reply.

It couldn’t come soon enough. When things were finally ready, children and their mothers sat on the few wooden seats placed outside, or stood in the shade out of the hot sun. A small radio with speakers began to blast Christmas carols.

We began to hand out the Styrofoam cups of hot chocolate, bread rolls, and toys. Soon boys were zooming around the dirt road with toy airplanes in hand, and girls were setting up games with their new dolls. The Santa Clause pinata came down in an explosion of glitter and small candies. The children had magic in their eyes.

It was only hot chocolate, really. But it was enough to change the world for these children, even if only for a day. Soon each child had wandered off back home, and the chocolate pot was empty and smelling of cinnamon.

“Worth every penny,” Deysi said. “Here, have the last cup.” 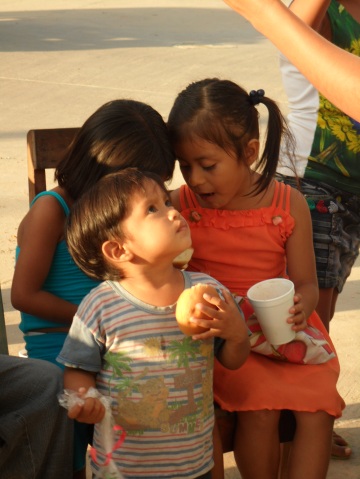 Jenni Taylor is about to embark on her next educationally vagabonding journey in Cambodia.
View all posts by Jenni Taylor →

One thought on “Everyone Loves Hot Chocolate”